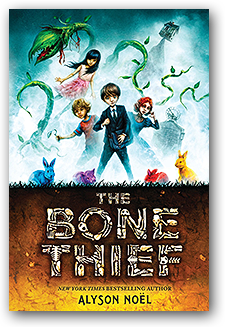 Fans of Tim Burton and Wes Anderson will love this new fantasy novel by #1 New York Times bestselling author Alyson Noël in which a ragtag team of eleven-year olds with otherworldly abilities set out to solve the mystery behind the sudden onset of ordinary events plaguing their very unusual town.

Compared to other more ordinary towns, Quiver Hollows is a very strange, very curious place. It is also home to longtime friends Grimsly, Ollie, Ming, and Penelope. In a town where everyone is spectacularly abnormal, Grimsly feels bad about being terribly, unforgivably normal, as the town's pet funeral director. So when a series of strange and disturbing mundane occurrences begins plaguing Quiver Hollows, well, Grimsly fears his growing celebrity just might be to blame since everyone knows that the things you focus on the most have an uncanny way of shaping your world.

The group of friends also learn that the bones in the pet cemetery are thought to be the source of the strange magic that binds the town of Quiver Hollows. With the bones now gone, the town's magic is quickly dissipating. Will it ultimately become as common and ordinary as everywhere else?

"The Bone Thief is an imaginative adventure chock full of surprises, featuring an engaging hero who is anything but ordinary. Great fun!"
—J.A. White of the The Thickety series

"This is the kind of book that kids will get excited about it and want their friends to read to share in the adventures. She grabs your interest from the first page with vivid descriptions and makes you feel like there is someone sitting right in front of you spinning an intriguing tale of magic and fantasy...Described as the perfect story for Tim Burton fans, I'd have to say that's fairly accurate and would love to see what he could do with this on the big screen. Although there are some creepy parts it ends in this incredibly beautiful sunny way that leaves your heart happy."
—ArtisticBent.org